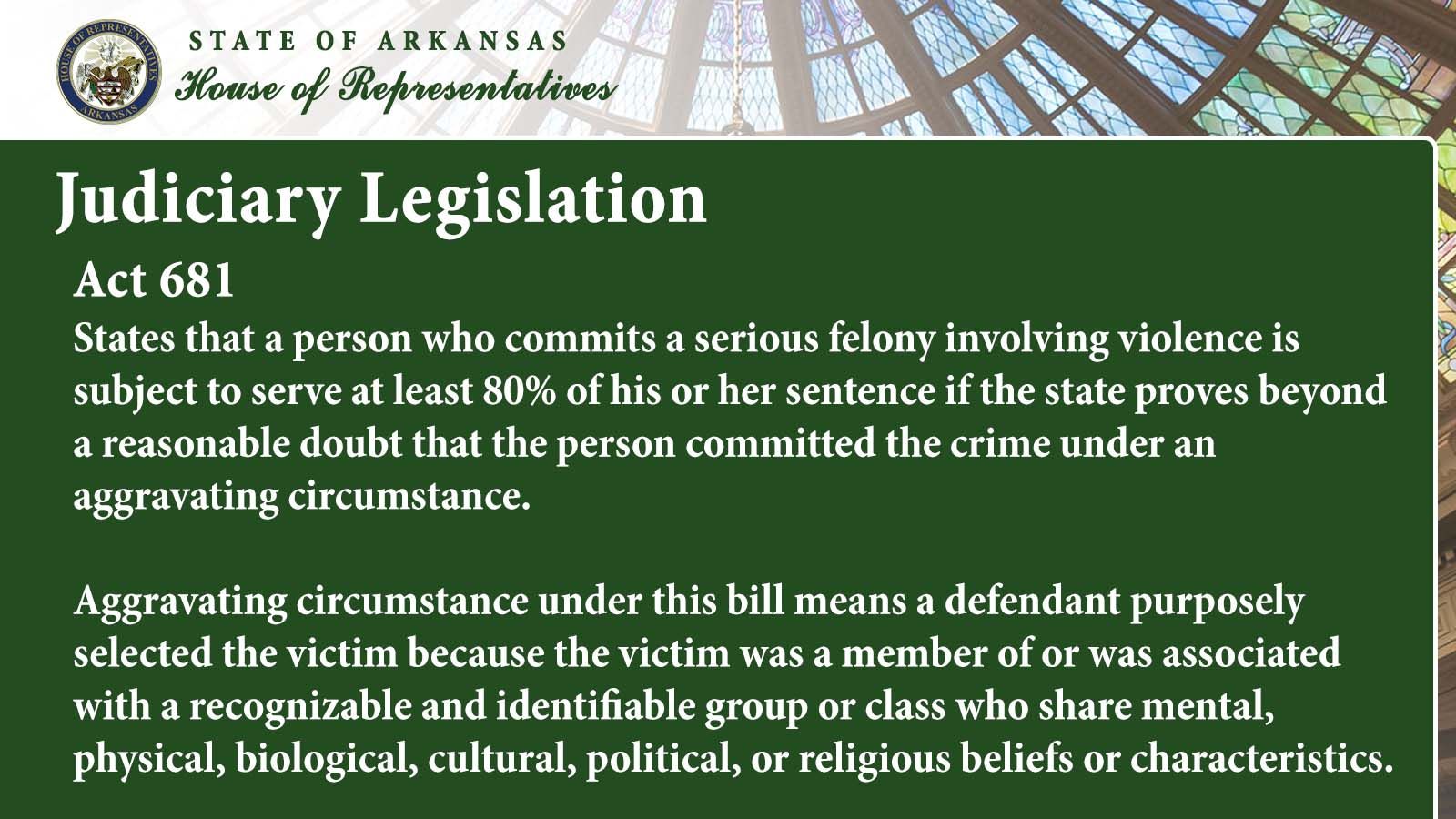 Act 250 removes the duty to retreat before using physical or deadly force.

Act 681 states that a person who commits a serious felony involving violence is subject to serve at least 80% of his or her sentence if the state proves beyond a reasonable doubt that the person committed the crime under an aggravating circumstance.

Aggravating circumstance under this bill means a defendant purposely selected the victim because the victim was a member of or was associated with a recognizable and identifiable group or class who share mental, physical, biological, cultural, political, or religious beliefs or characteristics.

HB1957 states all acts, laws, orders, rules, and regulations of the United States Government that were enacted on or after January 1, 2021, that infringe on the people's right to keep and bear arms as guaranteed by the Second Amendment to the United States Constitution and Arkansas Constitution, Article 2, § 5, are invalid in this state, shall not be recognized by this state, are specifically rejected by this state, and shall be considered null and void and of no effect in this state.

Act 340 makes it a Class D felony to steal a postal package from the porch or premises of a residence. Currently, the offense is a misdemeanor

HB1323-This bill allows for the prosecution to display an in-life photograph of a homicide victim to the judge or jury.

Act 502 defines financial hardship for courts in determining a defendant’s right to a public defender. It also allows DFA to release tax returns to the court for review.

Act 422 prohibits inmates from being placed in solitary confinement if the she is pregnant, has had a baby in the previous 30 days, is breastfeeding, or suffering from postpartum depression.

Act 375 prohibits unlawful doxxing of a minor on social media. Doxxing is defined as publishing private or identifying information about a particular person on social media with a malicious purpose.

Act 713 addresses damage, destruction, or vandalism to buildings and objects on the State Capitol Grounds and at the Governor’s Mansion. It states damage to public buildings or objects of respect is a Class A misdemeanor if the damage is under $500. It becomes a Class D felony if the value of the damage exceeds $500.

Act 558 makes leaving the scene of an accident with injuries a Class D felony. If there are serious physical injuries or death of a person, the offender would be charged with a Class B felony.

SB513-This bill amends the law concerning the suspension or revocation of a person’s driver’s license for failure to pay a fine or failure to appear. This would allow judges to restrict a license rather than suspend to allow the defendant to drive for essential purposes.

Act 800 extends the statute of limitations for specific domestic violence offenses if there is certain undisputable evidence (such as DNA)  produced.